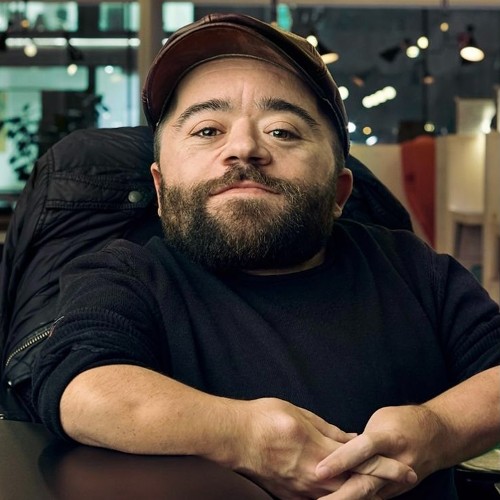 Dom is a media professional who consults and educates internationally on a range of topics including diversity, inclusion and accessibility. Dom was born with a severe form of Osteogenesis Imperfecta (more commonly known as Brittle Bones). He had more than 25 broken bones during birth, is of short stature and uses a powered wheelchair for his mobility.

Dom joined the Purple Goat agency team in February 2021 as Head of Strategy – the world’s first and only disability-led and disability focused agency looking to create the most inclusive, representative and forward thinking marketing campaigns in the world by integrating disability knowhow and lived-experience in all aspects of campaign development and execution. The agency has seen tremendous growth over the last couple of years, with international clients including Meta, Virgin Media, the EU and Starling Bank. They wholeheartedly adhere to the mantra of “Nothing about Us, Without Us.”

Dom’s first real exposure to the world of Media came when he starred in C4’s award winning documentary ‘Crip on Trip’ – documenting the travels of him and his non-disabled school mates interrailing around Europe before heading off for University. After studying Management at Warwick Uni in the UK, Dom secured a place on the C4 Graduate scheme. This led him to work at the sports TV production company Sunset+Vine as a producer working across output including the landmark Paralympic coverage in 2012 and 2016. He has since worked in various digital media, marketing and communications roles, which led him to founding Tiny Man Digital, a digital marketing agency that helps diverse companies shine online.

He is also the founding editor of the Disability Power100 – Power List of Disability, which inspires the younger generations of people with disabilities by showcasing a list of powerful leaders in diverse industries.

As someone who is extremely comfortable talking about all aspects of disability, he passionately looks to educate and build understanding on issues around disability and representation. Outside of work, Dom loves traveling the world, playing Latin percussion, and drinking good coffee!