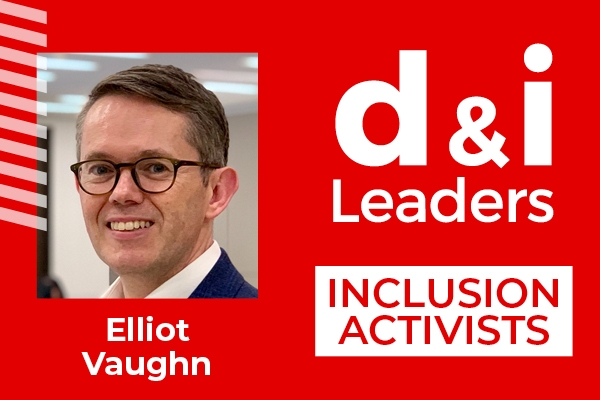 Q. Tell us about yourself, in particular what led to your interest in advancing equity and inclusion?
A. I’m GiveOut’s founder and chair the charity’s Board of Trustees. What started as an idea back in 2015 has become GiveOut – an international LGBTQI community foundation that enables philanthropists in our community and allies to fund the movement for LGBTQI equality worldwide.

I came out aged 15, growing up in a small village in the UK. At Cambridge, I led the University’s LGBT group and it was there I met my husband-to-be, Colin. Growing up different didn’t feel easy at the time, but looking back, I was one of the lucky ones. I have always been able to count on the love and support of family and friends.

At work, I have built a career at Boston Consulting Group (BCG), where I’m a Senior Partner. I have tried to be active in supporting LGBTQI charities and also provide leadership to our Pride@BCG network.

But in 2015 as I was turning 40, I realised something was missing. The more I learned about what was happening to LGBTQI people around the world, the more I felt the need to do something more.

Q. What outcomes are you wanting to achieve and why do these need to happen?
A. Around the world, LGBTQI people face discrimination, violence, and even death simply for being ourselves. Private, consensual, same-sex sexual activity between adults is criminalised in 69 jurisdictions, with 11 including the death penalty as punishment. Around the world, public order and vagrancy laws are used to harass, arrest and prosecute trans people, and gender expression and identity is criminalised in 14 jurisdictions through ‘cross-dressing’, impersonation and disguise laws.

Courageous activists are doing vital work to protect our communities and improve the lives of LGBTQI people. But they lack resources and funding is fragile, especially in the Global South and East. LGBTQI groups receive a tiny fraction of international development aid – just 4p in every £100 awarded by governments.

Our community and allies want to provide support, but it is not always easy to do so. GiveOut’s purpose is to help address this urgent need by providing a platform for our supporters to give tax efficiently in one place to fund LGBTQI human rights activism worldwide.

Q. How is your work helping to achieve these outcomes above?
A. To create a world where LGBTQI people can live their lives freely and openly, we need a properly funded global LGBTQI movement that can advocate on behalf of our community. With the right resources, our movement can help eliminate discriminatory laws, policies and practices, change attitudes and create safe spaces in places where LGBTQI people and identities are not accepted.

In the Global South and East in particular, LGBTQI activists’ efforts are hampered by substantial legal and practical barriers to fundraising, beyond those experienced elsewhere. Pooling donations from our community and allies, GiveOut are building a safe, reliable source of funding especially for groups in these regions. We identify pioneering groups to support through a rigorous process of consultation, due diligence and vetting, guided by our Grant-making Advisory Panel and governed by our Board of Trustees.

We are incredibly proud of the progress we have made so far. In just four years, our supporters have provided over £1.2 million in new funding to the LGBTQI movement globally and now support over 37 organisations across six continents.

Q. Who or what inspires you to do what you do and how do you keep focused and energised in challenging times?
A. I am inspired by the LGBTQI activists we stand alongside. For example, Rosanna Flamer-Caldera, who leads Sri Lanka’s leading LGBTQI organisation, recently had a landmark win at the Committee on the Elimination of Discrimination against Women (CEDAW), who ruled that Sri Lanka violated the Convention on the Elimination of All Forms of Discrimination against Women.

Another activist who inspires me is Amir Ashour, who is the founder and chair of IraQueer, the first and leading LGBTQI human rights organisation working in Iraq. Not a single city in Iraq is safe for LGBTQI people, but IraQueer are working tirelessly to protect the LGBTQI community in Iraq.

One of IraQueer’s beneficiaries shared their experience living in Iraq and the support they received, saying: “Having the opportunity to stay in this safe house saved my life. Before I arrived here, I was constantly being verbally and physically abused by my older brother. I thought about committing suicide multiple times. I do not know if I would’ve been alive today if I didn’t have the chance to stay in this safe house.”

And with the ongoing situation in Ukraine, I am inspired by Ukrainian activist Olena Shevchenko, who heads Insight, an LGBTQI organisation in Ukraine. Olena and many other LGBTQI activists in Ukraine have been providing vital support to the community in Ukraine, despite the lack of support from large humanitarian organisations.

I am also inspired by some of the supporters who have come together to fund LGBTQI activism through GiveOut, including trans businesswoman Antonia Belcher OBE, Suki Sandhu OBE who sponsors the LGBTQI Asia Fund, and Josh Graff and his husband Jon Steinberg, who together sponsor the Steinberg-Graff Fund for International LGBTQI rights, which works to resource LGBTQI organisations campaigning for legal reform and human rights protections.

BCG has also been hugely supportive and senior leaders at the firm encouraged the work, and the firm even went on to become our founding sponsor.

Q. How can individuals support your work?
A. It is easy for individuals to get involved. Be part of our community of regular givers. Our 100 Circle of closest supporters give at the level of £100+/month or the annual equivalent, providing long-term support to the LGBTQI movement. Donations of any amount make a difference. To get involved, visit giveout.org

Q. What next?
A. Next year we will be celebrating our 5th birthday. Our mission is to continue to grow our community of supporters. We want a world in which Lesbian, Gay, Bisexual, Trans, Queer and Intersex (LGBTQI) people everywhere enjoy the freedom to be and to do, able to live their lives openly and fully, free from discrimination, fear and violence.

Find out more and get involved: