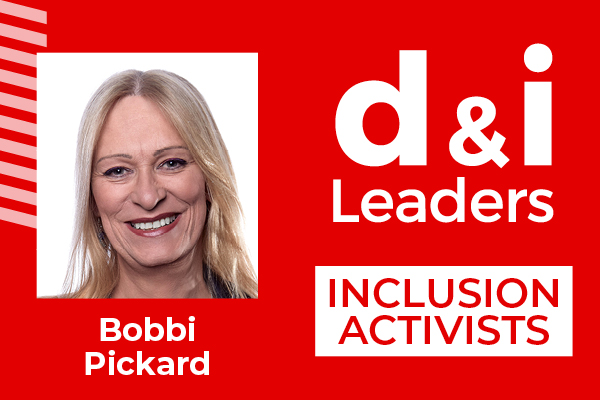 Q. Tell us about yourself, in particular what led to your interest in advancing equity and inclusion?
A. I’ve always been trans, I’ve been trans as long as I can remember. Like many trans people I spent many years with suicidal ideation – 92% of trans people have suicidal ideation, 48% attempt suicide in their life and 85% have some form of depression. This is not because they’re trans, but because they don’t feel they are allowed a place in society, so they’re forced into being someone they’re not. It makes life hell.

I’m now the CEO of Trans in The City, but I had a really hard journey to get to where I am and I don’t want anyone to go through the same difficulties and challenges I faced so that’s why I do what I do. I don’t think it’s unusual that anybody from a minority group goes on such a journey. I think it gives us more empathy and a deeper understanding of humanity and a desire for more equality in society.

Q. What outcomes are you wanting to achieve and why do these need to happen?
A. What I want to see and work so hard for is for people to understand that being trans and non-binary is a perfectly natural form of human development that’s happened throughout human history and for society to accept trans and non-binary people. We really need to convey the message that trans people deserve the right to love and to flourish like everybody else in society.

Q. How is your work helping to achieve these outcomes above?
A. Trans in The City is the world’s largest corporate collaboration on trans and non-binary awareness with over 350 major organizations working with us. We also support trans, non-binary and LGBTQIA+ charities, especially smaller grassroots ones because that’s where I really think we can make a huge difference.

Q. Who or what inspires you to do what you do and how do you keep focused and energised in challenging times?
A. There are a lot of LGBTQIA+ people that inspire me: Lisa Power, one of the founders of Stonewall is such a dynamo of LGBTQIA+ and human rights; Roz Kaveney, one of the early trans members of the Gay Liberation Front; Michael Cashman; Linda Riley and Sarah Maslen – anybody that’s a pioneer that just keeps going despite how they feel or how exhausted they are – they just help other people.

We have some amazing trans activists, people like Emily Hamilton, Kim Warren and Skye Morden that are struggling so hard to get their voices heard and facing so much abuse for just wanting a better life for trans people.

Most trans activists don’t have the privilege of funding at the moment and so are holding down two or three or four jobs to do our activism, it’s exhausting. Trans people get so little recognition because the media are running an active and sometimes very vitriolic campaign against us. We’re not allowed onto broadcast media without having somebody that’s there to come from an anti-trans group to ‘balance’ whatever we say; I can’t think of any other diversity that gets treated in this way.

Print media reporting for trans people is even more negative so there’s no way for activists and role models to reach people and get their message out really other than hard graft and in person. That’s what I find so inspiring. That’s what inspires me, all the activists that I see despite the abuse, despite the media against them, keeping on, getting their truth out there and never giving up.

Q. How can individuals support your work?
A. The easiest way is if somebody is trans or non-binary in business and they want to help then they can join us either via our website www.transinthecity.co.uk or via LinkedIn and they can come and join us. Every single trans and non-binary person in industry is welcome to join us as an advisor. We also run an active allies network via LinkedIn.

Our November event, kicking off Trans Awareness Week, consists of a day of training courses, networking and inspirational speakers. In the evening we have our annual Trans In The City Gala with 600 guests and an award ceremony. Our headline sponsors this year are JP Morgan we have some amazing sponsorship from Google, Deutsche Bank, BP and LSEG for the award categories and many more organisations sponsoring the event itself.

I’m looking forward to it so much and it really does showcase how far ahead global corporates are in trans and non-binary inclusion. If organisations would like to sponsor or attend they can get in touch via the website.

Q. What next?
A. Frankly, I don’t think trans or non-binary awareness will ever be resolved in my lifetime, so I think it will carry on long after I’m here. It’s not really important that I see the end, it’s just important to know that I’ve done everything I can to lay down some foundations to allow others to finally let trans people live and be happy.

For Trans in the City we need to get into a position where we have enough sponsorship from businesses to provide training and information to those organisations that need it. I never want trans awareness from Trans In The City to be dependent on an organisation’s budget, but obviously where an organisation has a budget and wants to make a positive difference then I’d love them to sponsor us and enable us to provide our services.

We are a not-for-profit organisation and what that sponsorship also enables us to do is fund charities and community groups that are really making a difference to trans and non-binary people’s lives. I’m proud to say that we’ve managed to raise over £300,000 in the last four years and that’s very important for me and my team.

Find out more and get involved: