Four ways the coronavirus could impact minority groups more than others

Four ways the coronavirus could impact minority groups more than others 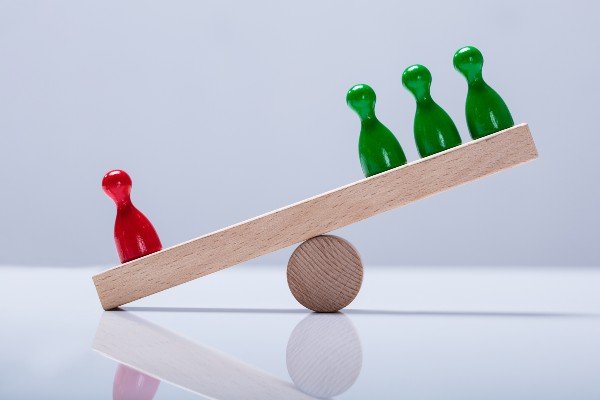 The medical statistics are hard to ignore. Earlier this month, the head of the British Medical Association asked the UK government to investigate whether black and minority ethnic (BAME) individuals were more at risk of catching Covid-19, after the first 10 doctors in the UK to be named as dying from the disease were all BAME individuals, and the Intensive Care National Audit and Research Centre found that 34% of critically ill patients in England and Wales were BAME, despite making up 14% of the population.

Outside the medical outcomes, there will also be more subtle and longer term ways that the virus will impact under-represented groups, particularly at work. Here are four ways it could leave its mark:

Decision not to penalise non-reporting of gender pay gap

On 24 March, the Government announced that employers would not have to submit their gender pay gap reports for 2019/20 by the early April deadline. In a joint statement, Minister for Women & Equalities, Liz Truss, and EHRC Chair, David Isaac, said that employers were “facing unprecedented uncertainty” and “it is only right” to suspend the enforced reporting cycle this year as HR departments dealt with more pressing issues.

Around 3,000 employers have already submitted their reports, but this makes up only just over a quarter of those who are covered by the regulations. In some sectors, such as financial services, the gap has widened at a number of employers. Many organisations, meanwhile, had made impressive progress in improving pipelines for senior female leaders and were beginning to narrow the gap – the concern is that by not enforcing the reporting cycle this year, this important momentum could be lost.

The pandemic has clearly highlighted issues around privilege – the differing experiences of social distancing or isolation for those with comfortable living spaces with gardens, for example, or the fact that many roles once deemed ‘low-skill’ are now essential and those workers are now putting their lives at risk while others can safely operate from home.

But a survey looking at graduate confidence found that social mobility issues could also spill over into the jobs market after the pandemic ends. A study by Bright Network found that 49% of privately educated students felt prepared for the world of work, compared with 42% of state-school educated people. Salary expectations of state-school graduates were around £8,000 lower, too. James Uffindell, the company’s CEO and founder, said: “The report does indicate that state school and private school-educated graduates will experience this pandemic, and the likely economic downturn that follows, quite differently. I call for employers and universities to ensure the same opportunities are available to all students, regardless of education, and that students from all backgrounds know about them.”

The continued saga over when and whether Brexit would officially happen had already put the brakes on a number of pieces of new legislation – and the coronavirus will likely only lengthen this delay. One such example is ethnicity pay gap reporting – the initial consultation opened in October 2018 and the government is still yet to respond with feedback based on the results. This is despite continued calls from the McGregor-Smith Review to apply ethnicity pay gap reporting to employers in a similar way to the implementation of gender pay gap reporting (although it suggested a lower employee threshold of 50).

A number of aspects of the Good Work Plan – the recommendations made in light of the Taylor Review in 2017 that support more equal distribution of employment rights – are also still in the ‘waiting room’. Yet changes to immigration requirements heralded by the UK’s exit from the EU will still likely go ahead.

Delays are also happening at European Commission level, according to reports from EURACTIV, a European think tank. The organisation has seen an internal EC document that suggests that Commission officials are exploring the possibility of delaying a number of initiatives related to LGBT, Roma and gender rights.

The sudden shift to homeworking was a shock to most, but may have had a disproportionate impact on those with neurodiverse conditions such as autism. The government recently relaxed the strict lockdown rules to allow those with autism and learning disabilities to leave their house more than once a day if it helped to maintain their health, but some aspects of the change to their working arrangements may have left them struggling.

The key change will have been routine, as workers with autism often like consistency in their office environments and rituals, so this may have been something to adapt to over the past weeks. But some employers have said that their neurodivergent workers are actively embracing their new workspace – “Some of our team members who aren’t comfortable making eye contact in person found they were able to do so on Zoom calls,” said one tech company manager. Regular informal check-ins should be on the agenda regardless of whether your employees have any additional needs, but are crucial here.

For D&I professionals, it may feel frustrating to have limited control over some of these longer-term outcomes. But continuing to foster inclusive workplaces and policies could ensure that, as we return to ‘normal’, there are fewer battles for minority groups to contend with.