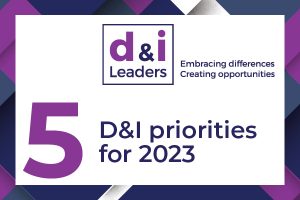 Although 2022 appeared to herald the end of a tough two years of the pandemic, it’s fair to say that the workplace has changed irrevocably since 2020. For D&I professionals this created an added lens through which to carry out their work, understanding how different groups were impacted by new ways of working and how some issues were exacerbated by them.

Looking forward to 2023, the pandemic will continue to leave a legacy. But this will likely be compounded by multiple other factors including a looming economic recession and socio-political uncertainty. Here we unpack five issues that could dominate D&I agendas in 2023.

1. The impact of a recession

Business group the CBI has predicted that the UK will fall into a year-long recession in 2023 as rising inflation, negative growth and dropping investment combine. We’ve already seen the impact of double-digit inflation in 2022 as the cost of living soared, and know that this has hit some under-represented groups worse than others. In May, the New Economics Foundation published an analysis warning that Black, Asian and other minority ethnic households would see their cost of living rise by 1.6 times more than their white counterparts. This is due to the fact they are often more likely to be in insecure work and therefore low pay, which often also means they face pricier arrangements for fuel bills such as prepayment metres.

For D&I teams and HR, it will be crucial to think about how the business can support workers who are in financial distress. Budgets may rule out a pay rise but there are non-financial initiatives that can help, such as access to financial education, earned wage access (getting paid earlier than payday for work already done) or discounts on commonly used products or services.

Many businesses have now settled into a hybrid working routine where employees attend the office one or two days a week but work remotely the rest of the time. But it’s important that managers don’t see this as a done deal, as working practices will continue to evolve for months and years to come. Research by video conferencing specialist Poly has found that companies see a 72% rise in productivity when employees work in a hybrid arrangement, yet 52% see this shift to hybrid as a “blip”.

Inclusion plays a vital role in the success of hybrid working – organisations where there are high levels of trust tend to see these increases in productivity as employees feel they can get on with tasks. But that sense of belonging needs to be nurtured and there needs to be flexibility, as rigid rules around logging on at certain times or attending in-person on certain days, can be as damaging to morale as a strict diktat to always be in the office. Working with employee resource groups and listening to employees’ concerns can help D&I teams to ensure hybrid working continues to go smoothly.

d&i Leaders’ global survey at the start of 2022 found that there is still a significant proportion of businesses where one person looks after the entire D&I function, but in 2023 we may see a shift to D&I having a more cross-functional, as well as more important, role in the business. Figures from the most recent UK census show that population diversity is changing quicker than targets can keep up with, and this will prove challenging for D&I functions if they are hemmed in.

At the same time, we’re seeing a growing partnership between D&I and organisations’ environmental, social and governance (ESG) practices, with a number bringing inclusion into that remit as the ‘S’ in the acronym. In practice, this could mean working with external partners on their own diversity initiatives or sharing resources; discussions with internal communications teams on creating a better sense of belonging; and working with finance on more ethical procurement. D&I function sizes may grow, but equally likely is that there will be more champions around the business who feed into the wider strategic goals.

4. Increased levels of hate or harassment

The pandemic appeared to add fuel to the fire of what had already become highly polarised online, and this will continue into 2023, with D&I professionals inevitably witnessing some of the fallout. Certain debates around immigration descend into racist abuse, while trans individuals are often on the receiving end of social media hate. Worryingly, hate crimes in England and Wales increased by 26% in 2022 compared to the year before, so the potential for things to escalate should not be underestimated.

This can spill over into office life if employees feel emboldened to share views on platforms such as Teams or Slack, or conflict arises in the physical workplace. For D&I professionals, it will be crucial to create safe spaces or mechanisms where employees feel they can report any harassment. Equipping managers with the confidence to call out banter that has crossed a line will be equally important, as the individuals themselves may feel unable to do so. It’s not just about promoting a more inclusive and empathetic workplace, either – an employee captured spouting hateful views online could cause damage to the reputation of the company.

There was good news this month as the UK government confirmed that plans to give employees the right to request flexible working from their first day in a role would be taken forward, although no date on when the right would be introduced. Behind the scenes, however, we could see other key rights watered down or taken off the statute book altogether. In September, the UK government introduced the EU Retained Law Bill, which proposes that all retained EU law contained in domestic secondary legislation is revoked by December 2023.

This post-Brexit move is concerning for D&I professionals because many workers’ rights we are used to – including the right to a certain amount of paid holiday and limits on the number of hours we work each week – are derived from EU law. Although the Equality Act will not be affected as it is primary legislation, legal experts have warned that laws protecting part-time workers, agency workers and those who are transferred to another business could be in the firing line. Organisations that go against the tide on this are likely to reap rewards, offering over and above minimum requirements leading to better employee retention and engagement.