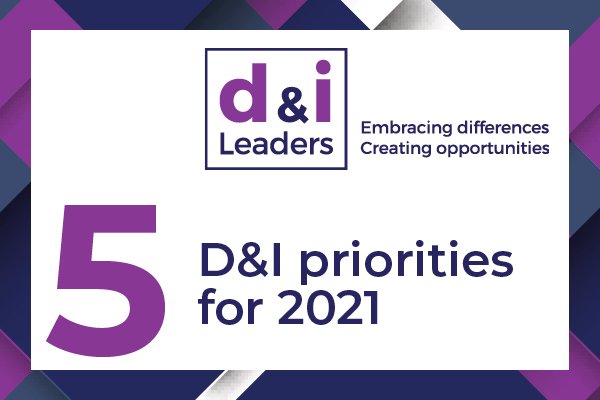 For D&I professionals, 2020 was definitely a year of extremes. The pandemic has dominated strategies for the past nine months and will continue to do so well into 2021 and beyond. In May, the murder of George Floyd and subsequent Black Lives Matter responses sparked a movement in the D&I agenda that few could have predicted. The diversity function may not be on the front line in the same way as the key workers we all clapped for this year, but it has absolutely been in the spotlight.

What lies ahead for 2021? From a UK legislative point of view, the shape of the Brexit agreement on 31 January could influence whether we see new regulations that impact equality strategies. Elsewhere we may see new D&I trends emerging as working life returns to something like normality. Here are five potential developments to watch out for.

Despite the pandemic, there was good news this year in terms of voluntary ethnic pay gap reporting. A survey by PwC in September found that two-thirds of businesses now collect ethnicity data, and almost a quarter have calculated their ethnicity pay gap.

The consultation on the introduction of legislation requiring companies to report on ethnicity pay gaps closed in January 2019, and some legal experts predict this will be back on the legal timetable in 2021 when parliamentary time allows. There is a growing appetite for this to become a legal reality, with a petition urging the government to make ethnicity pay gap reporting mandatory acquiring more than 130,000 signatures. The Bridge the Gap report, published in February by CBI and Eversheds Sutherland, also encouraged employers not to wait for legislation before publishing their data.

However, introducing reporting is not without its challenges. Ethnicity is much less binary than gender, and many organisations have relatively low disclosure rates, making the data more difficult to process in an insightful way.

At this month’s Equality Law at Work conference, Alastair Pringle from the Equality and Human Rights Commission warned that organisations ran the risk of “exacerbating existing inequalities” by not taking an inclusive view to pandemic-driven employment decisions about furlough, pay and redundancy.

Research by campaign group Hope Not Hate found in August that people from ethnic minorities in the UK had been disproportionately hit by job losses and reduced hours during the pandemic, while women and carers (often in lower-paid roles), have also been hit hard by either being pushed out of work or being forced to juggle work with other commitments.

With vaccinations gradually being rolled out and as we gain knowledge of how this impacts immunity, we may see employers consider returning more employees to offices in the second half of the year. But it’s likely there could still be difficult decisions ahead, either around restructuring or the nature of people’s jobs. Involving employee resource groups in decision-making and consulting more widely with employees will ensure this can be done in as inclusive a way as possible.

3. Gender pay gap reporting back on the agenda

The Government Equalities Office paused enforcement of companies’ gender pay gap reporting obligations in 2020, for which the deadline fell just weeks after the pandemic began. Business in the Community has estimated that just half of those who fall into the 250+ employees category and are therefore required to report did so this year, and said this could see gender equality “pushed back a generation”.

Even the Government’s own departments have only just published their 2020 gender pay gap reports, with the gap widening at seven departments. While it is yet to be confirmed that enforced reporting will return in April 2021, there is a high possibility, and companies that choose to report have argued that they have seen benefits from doing so.

Research by the Fawcett Society and the Global Institute for Women’s Leadership at King’s College London has even argued that the UK’s approach is “light touch” compared to legislation in other countries. Sam Smethers of the Fawcett Society said it needed “to be reintroduced as soon as possible, with key changes made to make the system more effective”. While wholesale changes to the legislation are unlikely, one future development could be the extension of gender pay gap reporting to smaller companies – something a number of industry bodies and charities have campaigned for.

The Government consulted in 2019 on extending redundancy protection (which means the right to be offered suitable alternative employment) for employees taking maternity leave and for other new parents. It committed to extending the period of protection so that it applies from the point the employee informs their employer that they are pregnant, and lasts for six months after their return to work. The Government also promised there would be extensions to the protection periods for employees taking adoption leave and shared parental leave.

The Pregnancy and Maternity (Redundancy) Protection Bill 2019-21 is on its passage through Parliament, with the next stage of the Bill scheduled to take place in March 2021. This might not be the only change to family-friendly policies next year, either. In March this year, the Government said a new Employment Bill would include a statutory right for up to 12 weeks’ paid time off for parents of children that have spent at least a week in neonatal care.

The latter half of 2020 has been a real test of companies’ commitments to anti-racism. Many posted black squares in support of the Black Lives Matter movement in response to George Floyd’s death in May, but it’s fair to say that not all have followed this up with solid action.

Next year the pressure will continue for organisations to show that they are not only allies to the anti-racist cause but they are putting actions in place to embed this in their workplace culture. There’s a business imperative for this too. Earlier this year, Lloyds Banking Group was given a ‘credit positive’ rating by Moody’s after announcing its action plan on ethnic diversity. A group of 70 business leaders also recently demanded “sustainable and long-term” actions on racial inclusion, pledging to document these actions in their annual reports. We’ve seen highly public commitments from supermarkets, which rallied together after Sainsbury’s received a barrage of online criticism for featuring a Black family.

In conjunction with the likely appearance of ethnicity pay gap reporting on the statute books, 2021 should hopefully be the year in which organisations up their game on race – moving towards a culture where transgressions are called out, policies are inclusive and chances for employees of all ethnicities are equitable.

Accelerate your D&I strategy in 2021 with d&i Leaders!