Five D&I developments to look out for in 2020

Five D&I developments to look out for in 2020 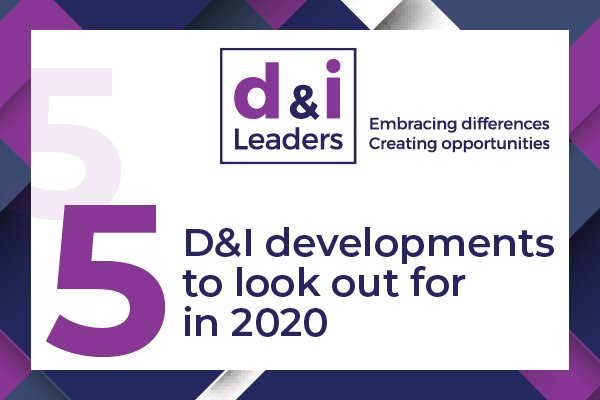 Without a doubt, 2019 was an eventful year politically in the UK, but in terms of progress on the diversity and inclusion front – there wasn’t much help from Westminster. Brexit dominated the headlines but never really seemed to make any progress, all topped off with a surprise Christmas election.

So what lies ahead for 2020? It remains to be seen if there will be any movement on a number of key D&I related pieces of legislation or if pledges made in election manifestos will bear fruit. Below we round up five likely milestones in the D&I calendar for the coming year.

Flexible working could become a default right
A new Employment Bill was announced in the Queen’s Speech shortly after the election, and one of the core components of this is the right to flexible working for all staff. Previously, staff were only able to ask for this right if they had more than 26 weeks’ service.

Conservative MP Helen Whately first introduced the flexible working bill in July, arguing that the change would help close the gender pay gap and help parents to share childcare. She said: “The 40-hour, five-day working week made sense in an era of single-earner households and stay-at-home mums, but it no longer reflects the reality of how many modern families want to live their lives.” The Bill still needs to pass through parliamentary process to become law, so its final timeline is yet to be confirmed.

Parental bereavement leave
The Parental Bereavement (Leave and Pay) Act 2018 comes into force in April 2020, providing at least two weeks’ paid leave for employees following the loss of a child under the age of 18 or a stillbirth after 24 weeks of pregnancy. When the Bill was introduced, business minister Kelly Tolhurst said that it was important to acknowledge that families deal with the loss of a child differently and policies needed to reflect that: “It is important this new law is designed so that people are given the space and respect to grieve in their own way.”

10th anniversary of the Equality Act
It may seem hard to believe that the most central piece of legislation for diversity practitioners is only 10 years old, but October 2020 marks a decade since the Equality Act came into force, providing a modern, single legal framework to better tackle disadvantage and discrimination.

The Act merged several existing pieces of legislation, including the Sex Discrimination Act, the Race Relations Act and the Disability Discrimination Act. It introduced in their place an umbrella of legal protection for nine ‘protected characteristics’: age, disability, gender reassignment, marriage and civil partnership, pregnancy/maternity, race, religion or belief, sex, and sexual orientation.

Ethnicity pay gap reporting
Arguably one of the casualties of the government’s focus on Brexit, a consultation on the introduction of ethnicity pay reporting legislation – similar to the gender pay gap reporting requirement – closed in January 2019, and there has been no feedback on the responses since.

However, the wheels could begin turning on the legislation again in 2020, and a small number of employers have proactively begun reporting their own ethnicity pay gaps. In March, 15 prominent UK organisations (including the Bank of England, BUPA, Deloitte, EY and KPMG) signed a commitment to work towards mandatory ethnic pay gap reporting and to encourage other businesses to do so.

Ethnicity pay gap reporting is not without its challenges, however, with companies struggling with an absence of appropriate data, defining categories for reporting, and problems with HR systems.

Executive pay ratios begin to be published
On 1 January 2019, legislation came into force requiring UK listed companies with more than 250 employees to report on the ratios between the CEO and average employees’ pay and benefits. As this requires a full financial year’s data, 2020 will see the first round of reports, which must be included in the directors’ remuneration report.

The aim is to provide more transparency over how top executives are paid, which in turn may lead to more restraint over ‘fat cat’ salaries. In 2019, the Chartered Institute of Personnel and Development’s annual assessment of FTSE 100 pay packages showed that median pay had fallen between 2017 and 2018 by 13%, but the average CEO salary was still more than 117 times that of the average UK full-time worker.

Accelerate your D&I strategy in 2020 with d&i Leaders!