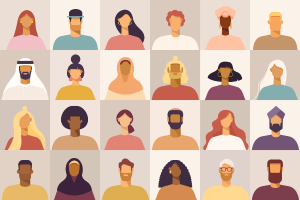 Religion and belief are protected characteristics under the UK Equality Act (2010). Employers are therefore legally obliged to accommodate employees’ religious needs, where possible. Yet workplace culture can inadvertently discriminate against certain faiths: afterwork drinks may discriminate against employees who abstain from alcohol for religious reasons or banning wearing religious jewellery without clear justification.

Some employees may also try to justify inappropriate behaviour as ‘office banter’ but this can overstep the mark where it goes beyond playful informal conversation says Melanie Morton, managing associate at legal firm Freeths. “Any type of unwanted conduct which has the purpose or effect of violating someone’s dignity or creating an intimidating, hostile or offensive environment is harassment. This may involve excluding a colleague from conversations because they are Muslim or telling offensive jokes about Judaism.”

Most, if not all employers are acutely aware of issues around discrimination, particularly around gender, disability and race, but religion still appears to be what The Telegraph once referred to as ‘the butt of workplace humour.” Indeed, a ComRes survey found that nearly one million workers may have experienced religious-related harassment, discrimination or bullying at some point in their working lives.

As Salma Shah, accredited coach and founder of coach training and development platform Mastering Your Power explains, religion is a deeply personal choice – it’s someone’s identity and core purpose. Religion or faith-related discrimination, as with any type of discrimination, can feel like a judgement. “If you feel your religion is being judged, it can feel like a judgement on you,” explains Shah, who is also the author of Diversity, Inclusion and Belonging in Coaching: A Practical guide. “If you feel judged in the workplace, it won’t feel psychologically safe.”

According to Joanna Hopkins, engagement, inclusion & culture manager at cloud-based mortgage and savings provider finova, diversity goes beyond visible factors: recognising and acknowledging the importance of faith, religion and belief for different people, even if not important to the employer directly, is a key element of an inclusive workplace. “Faith is an important part of people’s lives, so it’s not something we should ignore.”

finova recently implemented a flexible bank holiday policy to allow employees to take time off on the dates which are most meaningful for them and their religion. At the same time, they’ve reached out to their team in India in order to recognise their religious holidays.

“Every UK M&C Saatchi Group colleague, regardless of length of service, can swap up to two official bank holidays for alternative workdays of their choosing to celebrate religious festivals or holidays which matter to them,” says Charlie Glynn, UK People Director at the company. “The initiative has been well received. We have one member of staff who will use the Inclusive Bank Holiday policy to take time off for Milad un Nabi and another staff member will be using it to take time off for Yom Kippur.”

As Glynn explains, the group sees ‘real value’ in raising awareness of different faiths and they often observe and celebrate several religious festivals. For example to mark Eid, their employee-led heritage network collaborated with award-winning British-Pakistani artist Maaida Noor to install a special art exhibition in the foyer, celebrating Islamic art and culture.

For companies like finova and M&C Saatchi Group where a diversity of faith is celebrated, religious differences becomes the norm, even for employees with lesser known or less understood religions.

It was the case for retired PA and accounts clerk May Draper when she worked at property management company Camille Agencies. “It was just an open work culture,” she recalls. “I was always very open about my Pagan beliefs and in fact, I was often asked to perform cleansing and prosperity spells by colleagues. So despite a lot of outdated fears from the general public, my colleagues tended to be curious and interested rather than fearful or bigoted.”

Being curious, says Shah, is precisely what employers should encourage in a psychologically safe way. “We need to start having curious and clumsy conversations, where people feel comfortable discussing different belief systems.” she says. “We tend to make assumptions that everyone follows certain religious rules, but there’s often a spectrum of rules which people observe.”

For Shah, creating a faith-diverse workplace needs to come from a place of genuine commitment to religious inclusivity. Tokenism, she warns, is not the answer. “Having one-off ‘celebration days’ or inviting someone to talk about their religious identity only to dismiss their experience can do more damage than good. Instead, employers need to get under the surface and commit entirely to an inclusive multi-faith approach.”

Freeth LLP’s Morton agrees and recommends putting in place several initiatives to create a genuine culture of religious acceptance such as providing a prayer or reflection room, granting leave for religious observances, making exceptions to dress codes where health and safety permits and honouring dietary requirements.

“HR could also consider creating an employee interfaith group which provides a supportive environment for employees to share and learn about different religious identities,” she adds.

As finova’s Hopkins points out: “UK society is multi-cultural and multi-religious with people celebrating a variety of different holidays and festivals. As such, employees have the right to exercise their religious beliefs at work and employers have a duty to make sure this is possible.”